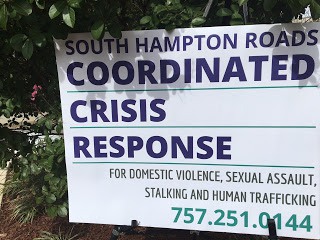 But, if you or a friend or family member are survivors of rape, sexual assault, human trafficking or domestic violence in southeastern Virginia, you will find immediate help by calling. Until October 7, 2016 there were multiple hotlines with different numbers. Each was staffed by shelters in area cities. Each was attached to a specific shelter but had no easy way to know what other organizations might have openings for someone needing to move to safety right then.

The launch the region’s first Coordinated Crisis Response was timed for October -- Domestic Violence Awareness month. The October 7 ribbon cutting at the YWCA's downtown Norfolk headquarters drew advocates and government leaders from throughout Virginia and Hampton Roads, including Virginia Attorney In the Community Mark Herring.

Trained staff and volunteers are available 24/7 to get information, help and safe shelter for the callers.The YWCA is housing the hotline and is training. Estimated call volume per year is 20,000 -- based on calls the shelters fielded last year.

This Virginian-Pilot article highlights the importance of this new coordinated effort in its October 8 article.

The late Guy Winfrey's 1997 bequest started the Sue Cook Winfrey Fund at the Hampton Roads Community Foundation. His field-of-interest fund is for spouses and children experiencing domestic violence and has provided more than $2 million in grants to area nonprofits over the past 19 years. Guy, a car salesman with a good heart, led a hard-knock childhood and dropped out of school at age 14 to go to work to help support his younger siblings. We think he would be pleased to see how his generosity is helping others get the help they need to lead better lives.

Learning About Discriminatory Laws and Policies